Today marks a major milestone in the global fight to eliminate illegal logging and the trade in illegal timber products, as Indonesia begins issuing FLEGT (Forest Law Enforcement, Governance and Trade) licences that attest to the legality of the timber products it exports to the EU.

The FLEGT licence automatically meets the requirements of the European Union (EU) Timber Regulation (EU Reg.# 995/2010), which prohibits operators in the EU from placing illegally harvested timber and products derived from illegal timber on the EU market. Importers of FLEGT-licensed timber products can place their imports on the EU market without the need to conduct any risk management exercise (due diligence).

Indonesia’s FLEGT-licensing scheme is based on a mandatory certification system called the ‘Sistem Verifikasi Legalitas Kayu (SVLK)’ or timber legality assurance system, which was developed by representatives of Indonesian forestry stakeholders.

The FLEGT licensing scheme is the first of its kind in the world, and is the result of a Voluntary Partnership Agreement (VPA) between Indonesia and the EU.

Indonesia and the EU negotiated and implemented the VPA to address illegal logging and its associated trade at the supply and demand sides, improve forest governance and promote the trade in legal timber products.

All timber product types listed in the VPA and directly exported to the EU must be now accompanied by a FLEGT licence issued by any of the 22 Indonesian Licensing Authorities. Competent Authorities in EU Member States will deny entry to any such products exported from Indonesia to the EU without a valid FLEGT licence.

Indonesia’s SVLK assures that all timber products harvested or imported, transported, traded, processed and exported comply with national laws on environmental, social and economic aspects as identified by stakeholders from government, the private sector and civil society.

“By addressing legality and meeting the EU’s high standards, we can not only trade responsibly but also ensure our forests support sustainable development, improve livelihoods and help address climate change,” said Putera Parthama, Director General of Sustainable Management of Production Forest at Indonesia’s Ministry of Environment and Forestry. “Today, all of Indonesia’s timber exports are from independently audited factories and forests. Our timber legality assurance system and FLEGT licensing scheme will continue to improve thanks to in-built mechanisms for addressing concerns as they arise.”

The SVLK includes sustainable forest management standards for forest businesses, and timber legality standards for all types and scales of timber industries as well as for small-holder privately-owned forest. Independent third-party Conformity Assessment Bodies accredited by the National Accreditation Committee carry out audits and the SVLK is closely monitored through independent forest monitoring performed by civil society.

This robust and credible SVLK is the system Indonesia negotiated with the EU in its FLEGT-VPA in order to provide assurance over the legality and even the sustainability of Indonesian timber products.

“The EU congratulates Indonesia on the great progress it has made in bringing its forest sector under control and improving forest governance,” said Vincent Guérend, the EU Ambassador to Indonesia. “The FLEGT licensing scheme has come about through constructive dialogue among Indonesia’s government, private sector and civil society. Indonesia has shown true leadership and now sets a high standard for other countries to emulate. We look forward to receiving the first shipments of verified legal, FLEGT-licensed timber, which Indonesia exported today. We also congratulate Indonesia for applying its timber legality assurance system to exports to all markets, and not just to the EU.”

The Indonesia-EU Joint Implementation Committee (JIC) oversees implementation of the VPA and the FLEGT licensing scheme. The decision to begin the Indonesian FLEGT-licence on 15 November 2016 was made by the JIC on its 5th meeting, in September 2016 in Yogyakarta.

Dr Rufi’ie, Director of Forest Product Processing and Marketing at Indonesia’s Ministry of Environment and Forestry said Indonesia is planning an event to celebrate becoming the first country in the world to issue FLEGT licences.

“A formal celebration of the shipment of FLEGT-licensed timber will be held in Jakarta on 24 November 2016,” said Dr Rufi’ie. He added that the Coordinating Minister for Economic Affairs has agreed to lead the event, which will also include participation by relevant ministers, timber industry associations, civil society organisations, as well as embassies in Jakarta.

The EU FLEGT Action Plan’s demand-side measures include the EU Timber Regulation, which prohibits operators in the EU from placing illegal timber products on the EU market. The EU FLEGT Action Plan’s supply-side measures include Voluntary Partnership Agreements (VPAs) with countries outside the EU, which commit to develop a robust timber legality assurance system and export to the EU only verified legal timber products accompanied by FLEGT licences. See: http://www.euflegt.efi.int/vpa-unpacked

When a VPA country begins FLEGT licensing, EU member states will no longer allow products listed in the VPA to enter the EU unless accompanied by a FLEGT licence. Indonesia is the first VPA country to set a date for FLEGT licensing to begin. Fourteen other countries are implementing or negotiating VPAs with the EU. Together these countries provide 80% of the EU’s tropical timber imports and have a total area of forest as large as the entire EU. See: http://www.euflegt.efi.int/vpa-countries

An independent evaluation, published on 4 May 2016, confirmed that the EU Forest Law Enforcement, Governance and Trade (FLEGT) Action Plan is a relevant and innovative response to the challenge of illegal logging and that the Action Plan has improved forest governance in all target countries. See: http://www.flegt.org/evaluation

Photos from the JIC 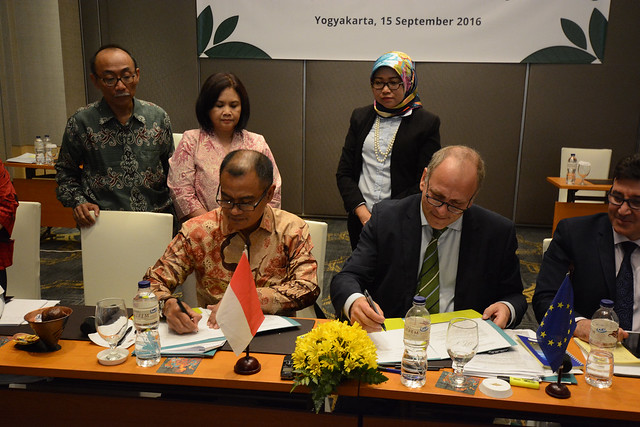 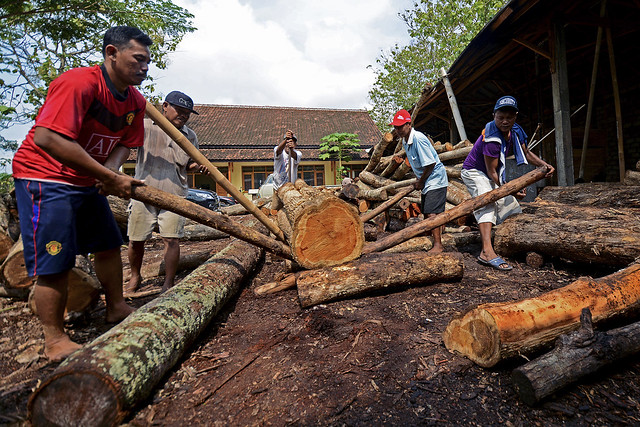